MOOSE  MILK  AND  THE  SANATORIUM

The Kostroma moose farm is neither the only nor the oldest moose husbandry in Russia. But, being established in 1966, this farm remains the most stable moose milk provisioner for human medication in Russia. Milking a moose has some distinctive features.

Several hours before parturition a colostrum appears in moose cow's teats. Newborn calves will suck it from his mother's udder on the parturition place. In few hours farm workers take calves away, tap the colostrum remainder from an udder, and a calf will suck it from a baby-bottle later. During the labor, moose cow defends her parturition range. After calves withdrawal dairywomen leave the range, but a mother continues to defend it furiously from other moose, though neither babies nor dairywomen are there (1). Dairywomen will come to her twice or thrice a day. 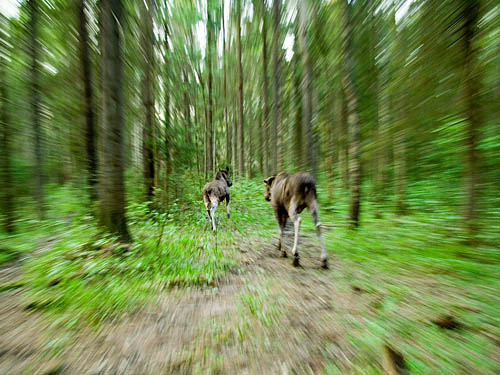 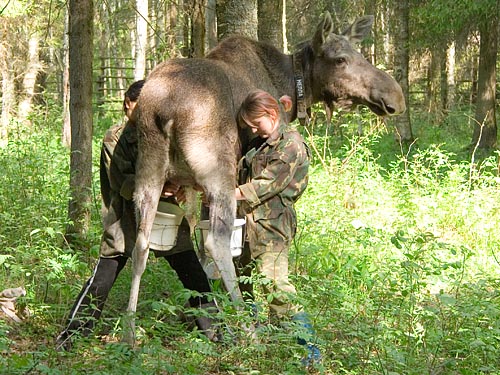 In the nature a moose cow defends her parturition place up to 4-5 days, learns to distinguish her calves from others, and calves get acquainted to her. Then they leave the range together for another place. On the moose farm, 2-3 days after delivery, if a cow «asks» to release her – stands near a gate – it is allowable to let her out. Primiparous moose must stay inside the maternity enclosure for a week. Before a green grass in fields and leaves on trees become abundant, cows either don't ask to open a gate or, being released, return in a short time to food troughs and branch piles. GPS tracking revealed: during the first week after parturition a cow doesn't go farther than a hundred meters from the farm enclosures, and later gradually increases the distance and expand her feeding range up to 2-4 km, no more. All gates will be open instantly when the last calf is born. Sometimes gates are close on side of «ark and bar» since 10 till 15 to reduce chance of visitors to meet a free moose cow. During this period animals may freely enter and leave the enclosure through gates on forest side.

Dairywomen stay on the farm waiting for cows since 6 till 12 and since 18 o'clock till midnight. Milk moose come for milking on their own accord, but if a dairymaid wants to hurry a moose, she can turn on an amplifier with a loudspeaker and microphone or tape recorder. The tape record contains trumpet («pioneer horn») sounds and calls of every dairywoman ever worked on the farm. Every moose cow likes to «answer a call» of her first dairymaid. If the weather is calm, the sounds from the loudspeaker are hearable from Volga River 8 km away from the farm. Now the loudspeaker is not used evey day because moose come for milking using their biological clock more or less punctually.

Because every moose has a transmitter attached to a collar, a dairymaid can take a radio direction finding receiver and a bridle and find a cow because some of them prefer to come up to the fence and lay down waiting for a «personal invitation». «A bad habit» can be evolved unintentionally, Nella likes to be led to milking with a bridle though doesn't resist. 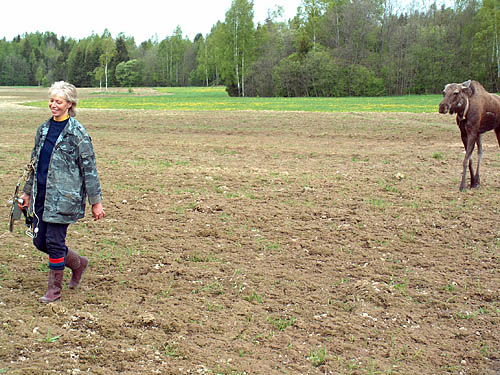 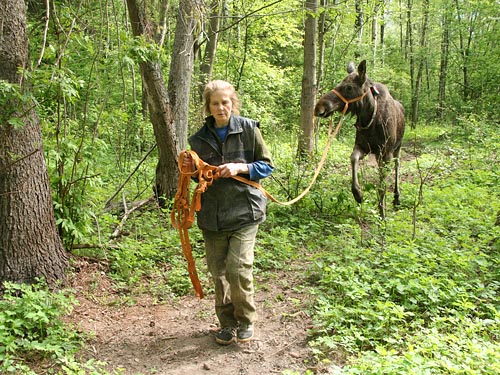 The receiver sensitivity can be minimized, in this case a dairymaid will hear signal only if a cow is about to approach the milking house, and it's time to go and meet her. 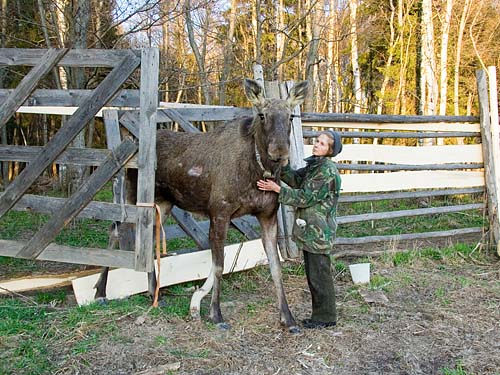 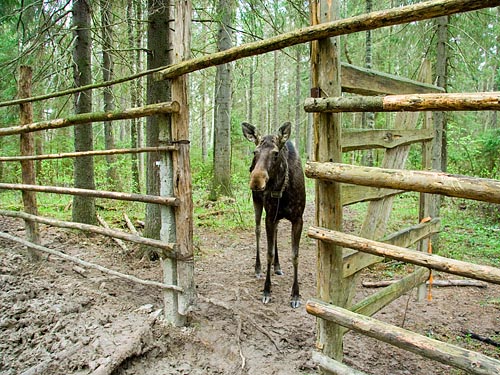 According to the methods approved, 4-7 days after delivery a moose cow should be milked in a milking house. In summer no biting insects will disturb her in a room. For both human and moose convenience milking stall has an oatmeal bucket holder, a perch for a dairymaid and sometimes a holding device to fix a moose for veterinary procedure or milking a primiparous one who is not acquainted with stalls. One journalist wrote that it has also a catapult seat to secure a dairywoman... I think it's too much a good idea.

Laying aside violence, against expectations, increased milk yield. In the latest years moose became appreciably more tame and cool. I think the reason is the presence of crowds of visitors, an abundance of visual, audio, scent stimuli which are not present in wild. The more people move around, the more moose get accommodated to noise. When helter-skelter cancels in the evening, milking time gives some relief. Calves mixed with children on excursion (see next page) lose the rest of fear of human. Some younger moose cows do not need leash. In summer some moose lose interest to oatmeal, bread and other «winter» delicacies, and give milk without any bait or restraint. It makes a «bilateral» milking possible. Two dairywomen  simultaneously milk a moose faster, she is not tired of milking which increases milk yield, too. 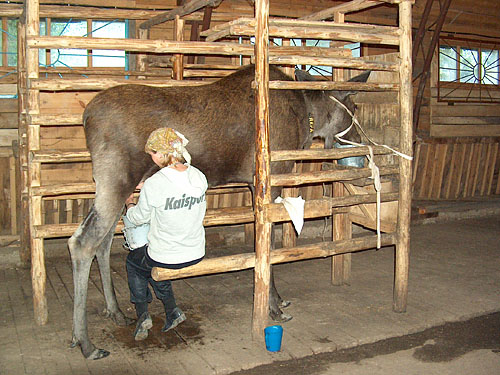 Machine milking takes several minutes, milking by hands takes a lot more. Machine milking is complete, clean, decreases teats load, many moose cows like this kind of milking. But it takes time to accustom a cow to the machine, it takes too long to wash teat caps after milking, so dairywomen don't like the milking machine and prefer to milk by hands because the number of milk-moose does not exceed 10-15. 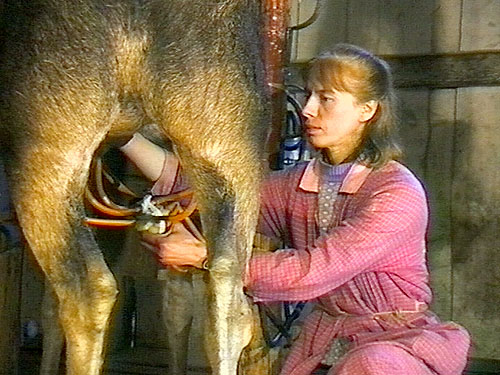 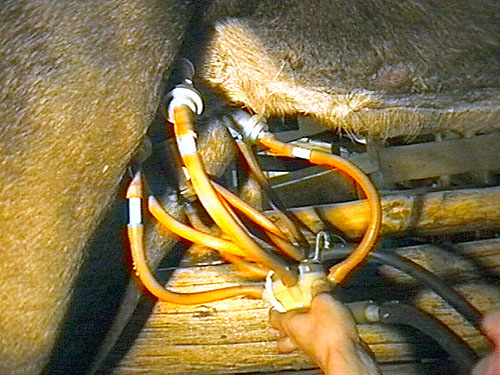 After milking the cow can go to pastures. In summer, if the day is very hot and gad-flies are abundant, almost all prefer to stay in the farm rooms until evening milking. In summer all doors have curtains made of canvas or crocus textile, and windows are closed with «blackout» black polythene curtains. Gad-flies cannot fly in the dark. Almost all rooms and corners are darkened to give animals a choice and avoid conflicts. Farm workers fill troughs with grass and affix some branches to the walls. Grass remains fresh for long time thanks to high humidity. 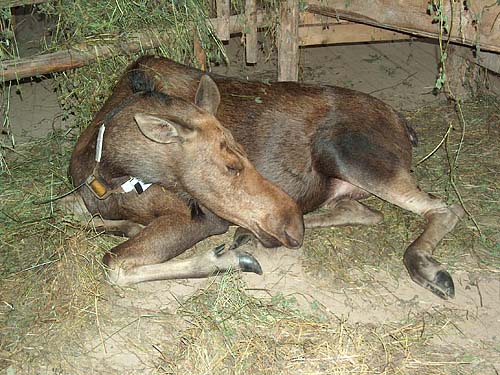 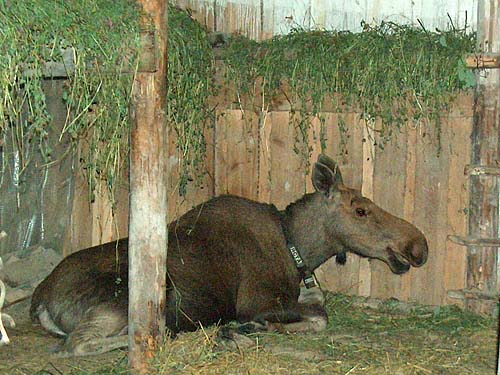 Some moose find surprising shelters. Nella is lying in an abandoned orthodox church building. It is not dark enough to prevent gad-flies from flying, but they must guess to fly in! In the nature the last chance for a moose to clear off gad-flies is bathing. Limonka and some other domestic moose like water, too. Her udder will be clean when she comes to the evening milking. 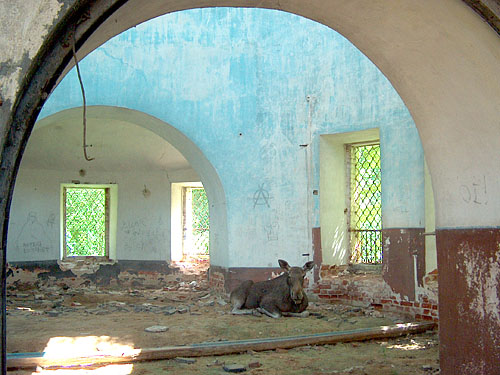 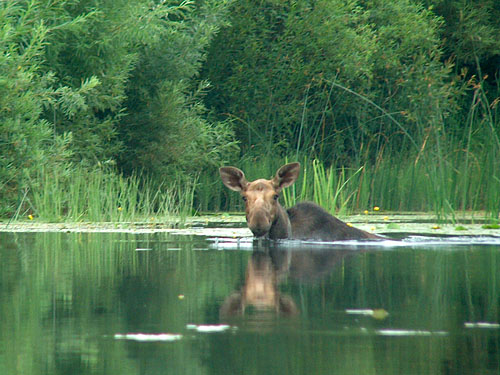 Specialists who studied moose milk healing properties in Yaroslavl Medical Institute and Gorky Research Institute of Pediatrics explained the presence of these properties by a unique diversity of his food, which consists not only of grasses, but a large number of wooden and bushy plants. Scientists who explored wild moose ration, found over 300 plants species eaten by moose (2). No «food service» of zoo or moose farm can provide captive moose cow with all these plants «in accordance with the list». That's why dairy moose must be free and able to find all necessary food.

Daily milk yield is only 1 to 6 liters, about 2,5 on an average. That would be enough to feed calves, but moose farm must give milk to medicine. Calves drink pure moose milk for about a week, but then it is diluted and gradually replaced with a special mixture, «a milk replacer». As a rule, since mid-June total yield of moose milk is enough both to resupply the stock of the sanatorium and for visitors testing. Sanatorium uses the milk for therapy round the year, but visitors have a chance to taste it since mid-June till late September. In the sanatorium milk is frozen, stored in liquid nitrogen and unfrozen before use, but visitors drink it fresh-drawn or cooled. Milk retains its healing properties, but I am not sure that it retains gustatory properties in liquid nitrogen. Some cannot drink it at all, some like cooled milk, but I prefer fresh-drawn. It is a little bit salty, a little bit bitter, and a little bit acidulous and has a light scent like of spruce needles though moose almost never eat spruce or pine in summer, and little in winter, rather enforced.

WARNING! THE SANATORIUM IS NOW UNDER REPAIR

You can buy milk directly on the farm

The Ivan Susanin sanatorium is the only recipient of moose milk. It is situated in a forest near a small Poksha River 16 km away from Kostroma. It is possible to walk there from the moose farm across two deep gullies and Poksha River by a shaky bridge. From Kostroma take a bus to Bolshoe Andreikovo, walk along the same road across the Poksha River, and then turn left along an asphalt road. The distance from the bus stop to sanatorium is about 2 km. 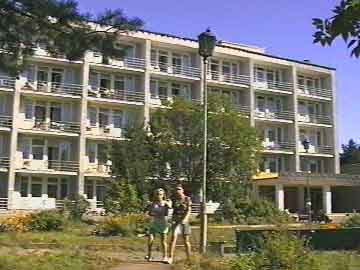 It is always full of people because unique, pleasant and effective methods based on moose milk are used here for peptic ulcer therapy. I'd better invoke the specialists to tell about its properties. I am not sure that I could translate all words accurately, especially in the second document, because the first one is compiled of already (not very comprehensively) translated papers.

Moose milk is regarded to be a natural product of increased biological value, apparently having diverse therapeutic mechanisms. Moose milk is also used in radiation lesions treatment and for prophylactics of cytostatic disbacteriosis during lymphogranulematosis therapy. First of all, high therapeutical activity is due to high lysozyme activity of 40 - 65 mkg/ml. Fat contents is over 10%; proteins over8%. The content of such essential amino acids as threonine, methionine, histidine and non-essential as serine, glycine, alanine and asparaginic acid in moose milk is twofold higher than that in cow milk. The high value of lipid and fat-acid composition of moose milk is noted, especially in terms of the composition of essential fatty acids. The content of such microelements as silicon, magnesium, aluminium, molybdenum and cobalt exceed their content in cow milk. Moose milk is stored for a long time at a temperature of liquid nitrogen.
Now the moose milk becomes available as economically profitable product. Using it as a source of lysozyme in clinical nutrition enlarges the arsenal of lysozyme-restoring remedies which not only adjust affected body resistance, but also enhance specific immunity, phagocytosis and reparative processes, have antiinflammatory and desensitilizating effect, remove noxious metabolites from the body, improve the composition of intestinal microflora, and enhance blood-histological barriers.

RECOMMENDATION
on moose milk use
Moose milk has specific taste properties, doesn't cause allergic reactions, has an explicit anabolic effect, because contains a number of irreplaceable amino-acids and micronutrients; has bactericidal and bacteriostatic effects; reduces hyperacidity of gastric juice, normalizes motor activity of stomach, improves neogenesis in tissues, stimulates T-cellular immunity, has a protective effect, protecting mucous membrane of digestive tract from cytostatic influence, blocks disbacteriosis development.
INDICATIONS:  Peptic ulcer in acute and partial remission phases; chronic gastritis with excess secretory ability. Recommended as health food during cytostatic and radiotherapy in cancer therapy.
RELATIVE CONTRAINDICATIONS: Stomach diseases accompanied with anacid state; intestinal diskinezy accompanied with obstructions.
METHODS AND DOSAGE: Whole moose milk without boiling and separation is to be prescripted 150-200 ml 4 times a day, heated to a room temperature, 20-30 minutes before meals.
Moose milk is stored in liquid nitrogen in special containers at temperature -190° in polythene film packs of 0,6 litres capacity which matches a daily dosage.
Frozen moose milk retains all the properties of fresh one. It should be taken from the liquid nitrogen immediately before use and defreeze unpacked in an enameled pan at room temperature.
Yaroslavl State Medical Academy
Prof. G. S. Kozlov
Dozent N. A. Antropov

One of the farm establishers, a veteran administrator of the Department of Animal Husbandry in the Kostroma Rural economy Experimental Station Vaso Milanovich Djurovich is a unique person. He became a moosefarming zealot after healing from a «hopeless» peptic ulcer with moose milk. Vaso Djurovich, a veteran of the Second World War, a member of the Yugoslavian Resistance, who was exiled for life not closer than 300 km away from Moscow by ungrateful Tito and Stalin, is still alive and working in behalf of moose farming in the same institution called now the Kostroma Rural economy Institute (http://www.kosmin.ru/).

Not moose milk is the main produce of the modern moose farming. The main produce is moose heat. Read on the next page about the method of its manufacturing.